Venous diseases involve blockages or abnormally large veins that portrude from under the skin or block the blood supply to other areas of the body.

Choose The Therapy That’s Right For You

Veins and venous diseases have multiple treatment avenues depending on both the type of venous issue as well as the severity of the problem. Our team works with you to develop a comprehensive treatment plan specified to you. 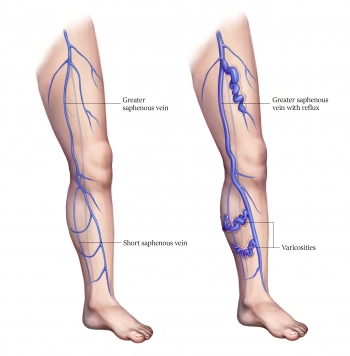 About Varicose Veins And Venous Valves

Varicose veins are abnormally large veins that protrude from under the skin in the legs. They can be associated with a brown discolouration (staining) or small purple or dark blue veins (reticular or spider veins). In addition to these visual changes, varicose veins can cause symptoms of discomfort, aching, mild swelling, burning, itching or fatigue. These superficial veins are extra veins and can be ablated without harm to your health or circulation. Ocassinally deep veins can be responsible for same or all of the symptoms you may be having.

All veins in the legs have thin valves that help direct blood flow toward the heart. These valves prevent blood from rushing backwards toward the ankles, especially when standing up. Varicose veins are branches of one of two main superficial veins called the greater (long) or lesser (short) saphenous vein. Varicose veins usually result because of a failure of the valves in the greater saphenous vein which runs down the inside of the leg, right from the top of the leg down to the ankle.

Types of Venous Treatments we offer

EndoVenous Laser Therapy (EVLT) is a minimally invasive way to ablate a saphenous vein with valves that are not working, which is the cause of varicose veins. The entire procedure is done in an office setting under local anesthetic which is used to freeze the skin and the area around the veins between the knee and the top of the leg. The laser is then used to fuse the vein shut. The procedure takes approximately 45 minutes. Bruising along the course of the vein is expected, but the amount of bruising and also the degree of discomfort is far less than after surgical stripping. Other advantages of EVLT is that a general anaesthetic is not required, return to regular activities is much faster, and rather than surgical scars there is only one 2mm mark in the skin where the needle enters. 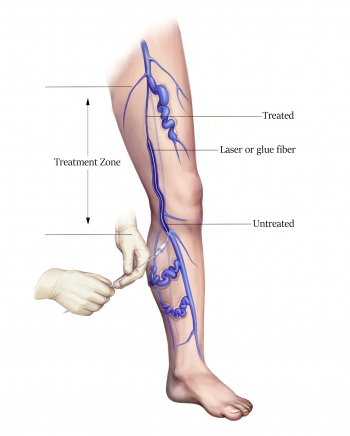 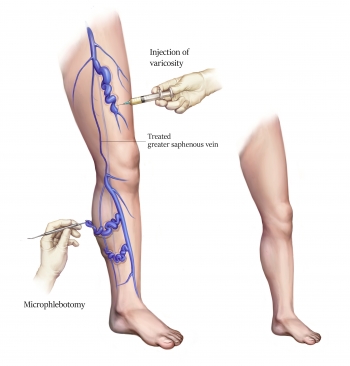 Following EVLT visible varicosities often disappear, depending on their size and location. Regardless of the appearance of varicosities, symptoms are very likely to improve significantly or resolve entirely following the procedure (if the deep veins are normal). Sometimes large varicosities, or those fed by perforating veins can be persistent after laser treatment. In these cases our surgeons will remove them under local anaesthetic a few months after your laser treatment. Finally, very small surface veins called spider veins do not typically resolve and usually require injection treatments after laser therapy. Any discolouration in the skin present before the procedure, especially if brown, is permanent and will not change as a result of EVLT or surgical therapy. In a minority of cases, after the procedure a small brownish bruise can form over resolving veins. These bruises are temporary but can take a long time to resolve (sometime more than a year). Unfortunately, EVLT is not currently covered by OHIP.

VenaSeal is a new therapy that builds on and extends on the advantages of laser therapy. The concept is to use a form of cyanoacrylate glue that has been designed and modified specifically for use in varicose veins. This glue has been in use in medicine in other parts of the body for over 50 years, and has been shown to be non-toxic, non-reactive, and safe. Rather than using laser energy to fuse the vein together, this procedure uses glue to shut the vein.

Results from a well performed randomized controlled trial were recently published comparing VenaSeal to other endovenous modalities, found a similar success rate (vein closure rate of 99%). Like EVLT, some perforating veins or large branches may need to be removed following the procedure using small incisions at a later date. Also similar to laser, any discolouration of the skin present before the procedure will still be present. Finally, also similar to the laser procedure, spider veins are unlikely to respond to VenaSeal and will require subsequent injections.

Custom-fit compression stockings are a safe and effective treatment for the symptoms of varicose veins. For best results, they should be worn every day, especially during periods of prolonged standing and walking. Our surgeons will provide you with a prescription for the stockings that are most suitable for you.

Injection sclerotherapy is another approach to the treatment of varicose veins, it involves injecting a glue-like material directly into varicose veins. This therapy is most effective for small veins. Following injections, you should wear compression stockings for best results. Our vascular surgeons will discuss if this option is right for you, as not all patients are good candidates for this treatment. Call us to book your consultation and see if this is the right treatment for you.  The assessment is covered by OHIP with a valid health card and a requisition form signed by your doctor.

“I can’t believe it took us this long to see Dr. Dueck and his team, they truly changed my life.”